by Dorothy Max Prior | www.totaltheatre.org.uk

The Actors Space is a renowned international centre of theatre and film, located in the Catalan hills, just one hour from Barcelona. In summer 2019, the centre marks 21 years of ‘empowering the actor to be free to play’. Dorothy Max Prior spoke to the founders and co-directors, Marian Masoliver and Simon Edwards, at the end of last season’s Dramatic Writing residency 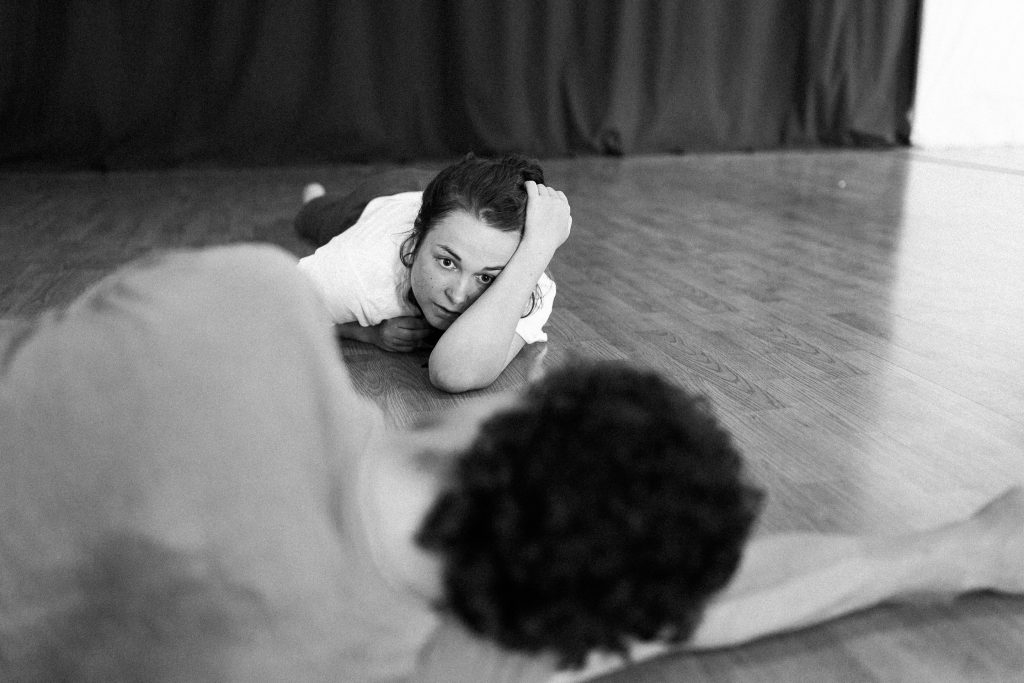 So says Marian Masoliver, co-founder and co-director of The Actors Space, which she runs with her partner in life and work, Simon Edwards, speaking in summer 2018 as the centre celebrated 20 years in operation.

The two met at the Lecoq school in Paris. After graduating, they both – separately and together – performed, directed, taught, and toured (with companies such as La Fura del Baus and Kneehigh) before deciding to set up a residential summer school in a beautiful old farmhouse in the hills of Catalunya, close to the Roman town of Vic, where Marian’s family had lived for many generations.

And so, for every year of the past two decades, they have welcomed students of all ages and experiences, from all corners of the globe, to participate in their unique actor-centred programmes.

‘In a typical workshop of eighteen people, there might be people from across Europe, India, Russia, the USA, Australia the Middle East… It is very interesting as a teacher to see how they all work together – beautiful to see that, and the different ways people approach theatre,’ says Marian. 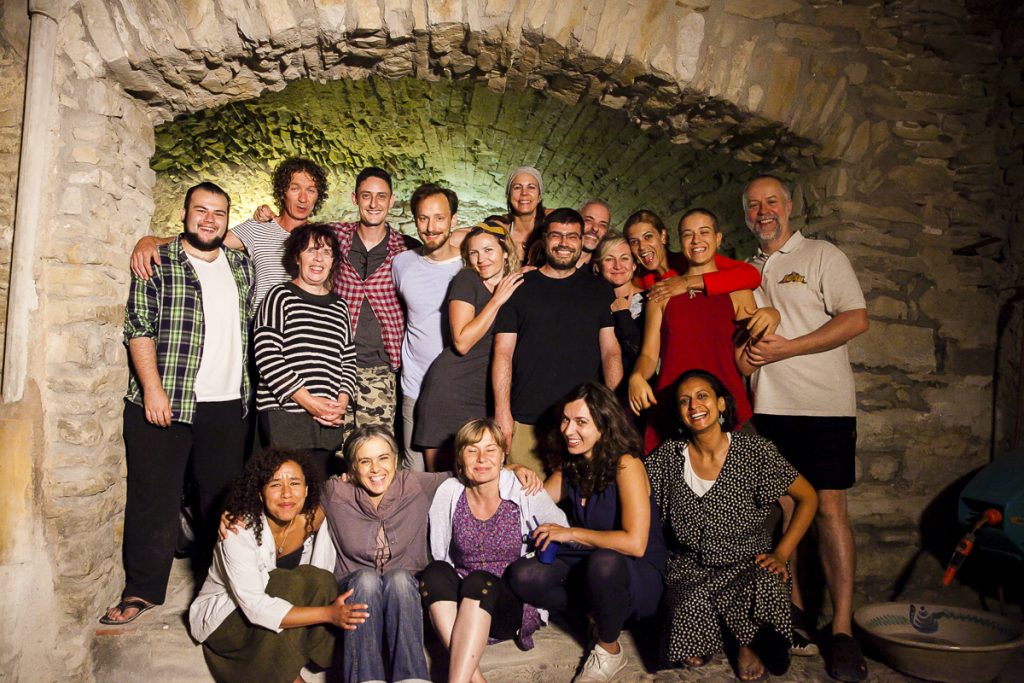 This internationalist approach is key to both of their beliefs. In life – as in theatre – international collaboration, harmony, resolving difference, and learning to live together are essential, to combat and contradict what Simon calls ‘the strange distorted mirror of modern media’. In a world in which the US presidency has turned itself into a sickening reality TV show; the Spanish government have cast themselves as bullies, taking agency away from the people of Catalunya; and the Brexit obsessed UK parliament has descended into a pantomime, political life today has moved beyond anything we could satirise as they are all doing it so well at it themselves. What on earth, then, can we do?

If you visit The Actors Space, the peaceful and communal ethos of the place becomes abundantly clear from the start. Yes, the work in the studio is important – it’s what has brought us here – but there is so much more. There’s the shared meals – home-cooked, using local produce as much as possible – taken around long wooden tables. There are the evenings after dinner, sitting and talking, or watching the bats and owls fly over the tree tops. There are the morning walks, through beautiful countryside, and the opportunity to swim in the pool, or just sit in the sun and read or write. There’s something very special about a residency in such a lovely environment, and the people you are with for the week become everything – family, friends, work colleagues. A tight-knit international community.

But what of the work inside that beautiful barn that serves as the training space? Simon says, ‘our strapline is “celebrating creativity” – and we really mean it!’

How the Actors Space operates, and what the work entails, has, Marian says, ‘developed organically’. It has grown from their training with Jacques Lecoq (who never espoused the notion of a ‘method’ in any case) to developing their own way of teaching, based on the observation of life, influenced by the work they have done around the world, and by their growing interest in film-making, both drama and documentary. Both speak of the need to continuously grow, change and develop as a teacher; to learn from your students and from the world.

‘In Iran, running a clown workshop, I learnt how much people valued coming together to tell stories, making each other laugh, blowing off steam – they influenced me deeply,’ says Simon.

‘As soon as there is a method, you’ve killed it,’ says Marian. ‘Killed the baby. Put it in a box. I teach in other places, and I am always researching.’ Tout bouge, as Monsieur Lecoq often said). 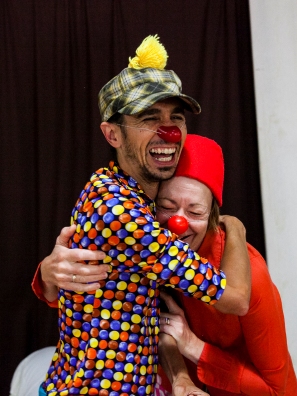 So, having started firmly wedded to the physical theatre work learnt with Lecoq – embracing movement theatre, mime, mask and clown – Simon and Marian have, whilst always honouring those roots and core practices – moved into very many other ways of working. They spend part of their year working on film projects, which have recently included some extraordinary documentary work with child soldiers in Colombia; and they have also worked in Ecuador creating radio pieces built around gang-leaders’ stories. Truth and reconciliation, and the part that theatre could play in those process  is a growing interest. ‘Even a small amount of expression of truth has power,’ says Simon. It is vital not to be cowed by oppression and injustice; to resist the tyrants and the
bullies; to see that justice wants to be seen to be done, and that this is the natural human order. Collective hope is important, to counter the feelings people (worldwide) have of being isolated or abandoned. Theatre, they believe, is a healing force, bringing people together – be it 8 or 800 people.

Inspired by these sentiments, Simon and Marian have also, in recent years, become involved with a local Carnival organisation in the small Catalonian town of Mollet (near Barcelona) – an opportunity for community celebration, and to laugh together at the ridiculousness of human behaviour.

Whatever media or environment they work in, they feel that they are always true to themselves: ‘This is the terrain: it is always about life, human relationships, how we deal with each other – our perceptions, dreams, realities…’ 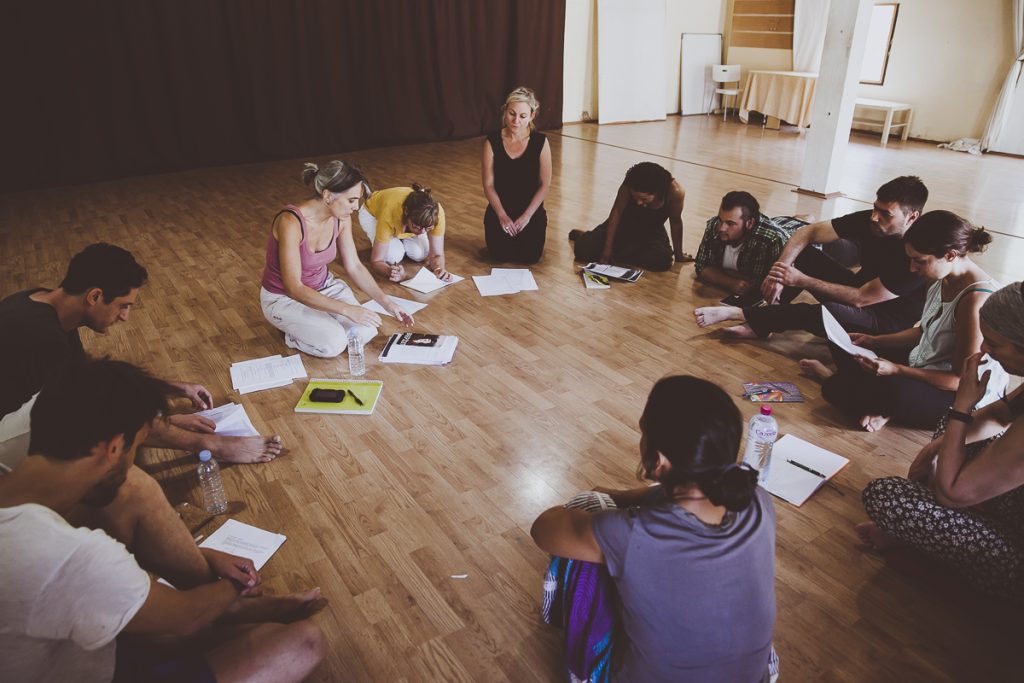 ‘We need to hear stories,’ says Marian. ‘Who are we? What are the choices?’ These questions are paramount – and universal. The work they both do year-round, outside of The Actors Space, informs what they bring to the residencies there. As does their personal experiences – as a couple, as parents, as members of their local community (the centre is their year-round home).

The summer residencies at the school have grown to include acting to camera, directing for film and theatre, and dramatic scriptwriting workshops.

These workshops have joined The Art of Comedy, which takes the student on a fabulous journey from full mask to red nose to creating comic sketches on-camera (written about by Total Theatre here); and The Creative Actor, which brings together Lecoq influenced physicality with a development of the complete actor, voice and all.

‘Why separate the voice from the body?’ says Marian ‘We speak! The voice is part of the body…. Stanislavski played a very big part [in the development of the actor] but Lecoq said, Why just the head? What about the rest of the body? Physical training is very important but that doesn’t mean you can’t use words… Like a musician, you need to learn all your notes! Use the full spectrum to create.’

Nevertheless, it is good to note that, as Simon puts it: ’In action, there’s meaning. In words, there can be the opposite of meaning. Look at the times we are in: lies upon lies! You try lying with your body – you can do it, physically you can lie – but not like the lies in the twisted world of fake presidents, fake news, and “alternative facts”.’ Where are the Fools? he wonders. The Fools in the courts of the oligarchs who can bring them down to a human level. ‘Is there a new surrealism? The work needs to be created – to burst the egos of these maniacs who think they are in control of things.’ 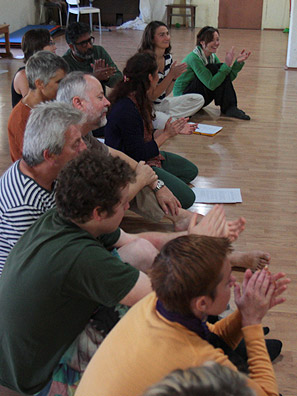 Ah, lies and truth… Simon and Marian are both fans of the screenwriting guru Robert McKee, and often quote his strapline, Write the Truth: ‘A culture cannot evolve without honest, powerful storytelling,’ says McKee, ‘When society repeatedly experiences glossy, hollowed-out, pseudo-stories, it degenerates.’

Marian speaks of ‘the creative triangle – writing, acting, directing’ as part of the same act of creativity. ‘The creative actor is writing when they devise – everything goes together.’

Regardless of which workshop they are enrolled on, the crucial thing for participants is, as Simon puts it, for them ‘to really explore what they are interested in, to trust their life experiences’. He talks of the theatre process as being like a sophisticated extension of child’s play. Explore the conflicts, find the resolutions. ‘Entertainment is important,’ says Simon, ‘Fun is underestimated. But we don’t want to just indulge, or be frivolous. We want to find the poetic depths – our common humanity…’ And later, he says: ‘It is not about making change, it is about sharing truth.’ Speak your truth, write your truth, act your truth.

‘Theatre,’ says Marian, ‘Will not die. There is something about being in the moment, unedited. It is very different to film. It’s immediacy is special’. And, she emphasises, even though the annual courses might bear the same titles, each one is unique – developing its own special character depending on who is there. As they say on their website: ‘Each workshop creates a new culture, one that shares our common humanity. Participants are freed from their own cultural constrictions and opened to fresh possibilities and new ways of working.’ 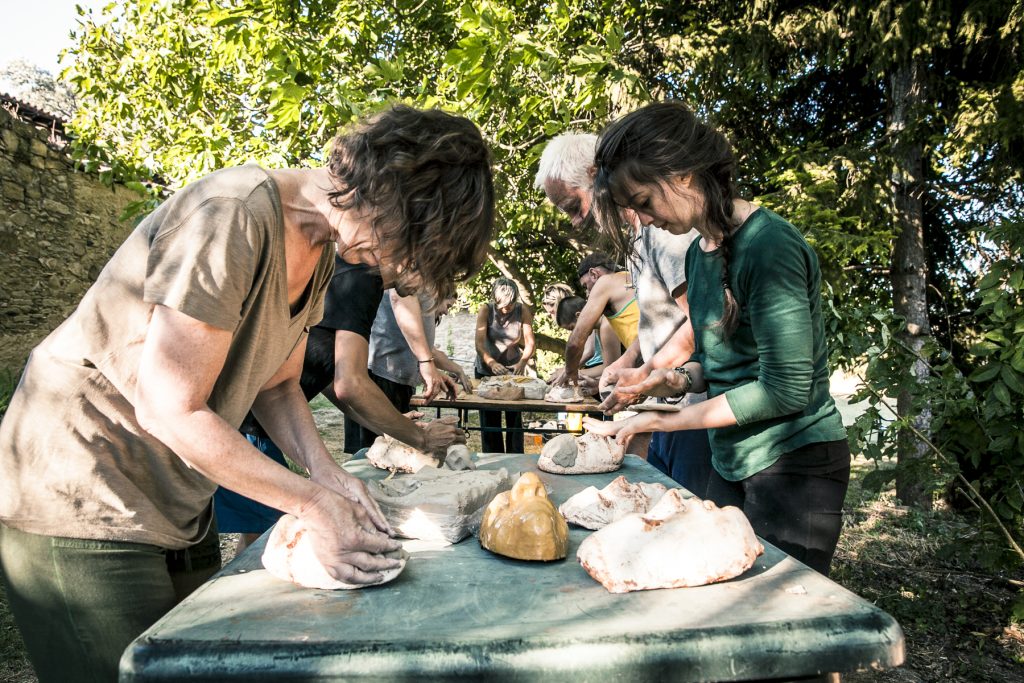 Maskmaking in the evening during The Creative Actor Workshop

And this is a good moment to note that there are always newcomers, but also very many ‘returners’ – people who have come back repeatedly over the past 20 years to this unique and special centre for theatre-makers and film-makers of all ages, experiences and nationalities. Marian says: ‘There is no Actors Space company, but it feels a bit like a company – there are people who come every year. There is a lot of trust – an environment of trust and safety. We only do this in the summer, which makes it very special.’

Simon talks of the returning experienced artists, and what they gain from the repeat experience, as having something to do with ‘the capacity to be a beginner [again] – allowing themselves to explore and discover’. And, on doing new things, and how successful that can be, he says: ‘Beginner’s luck isn’t luck, it’s a principle to be developed. In the not-knowing, inviting in the discovery.’

To be at the Actors Space is truly a gift – a way to give yourself the time and space for artistic renewal.

‘As long as people want to come here we will continue, it’s a wonderful experience for us and them’ says Marian. ‘Lecoq taught until he died – and we will continue as long as we are enjoying it.’

Long may that be! 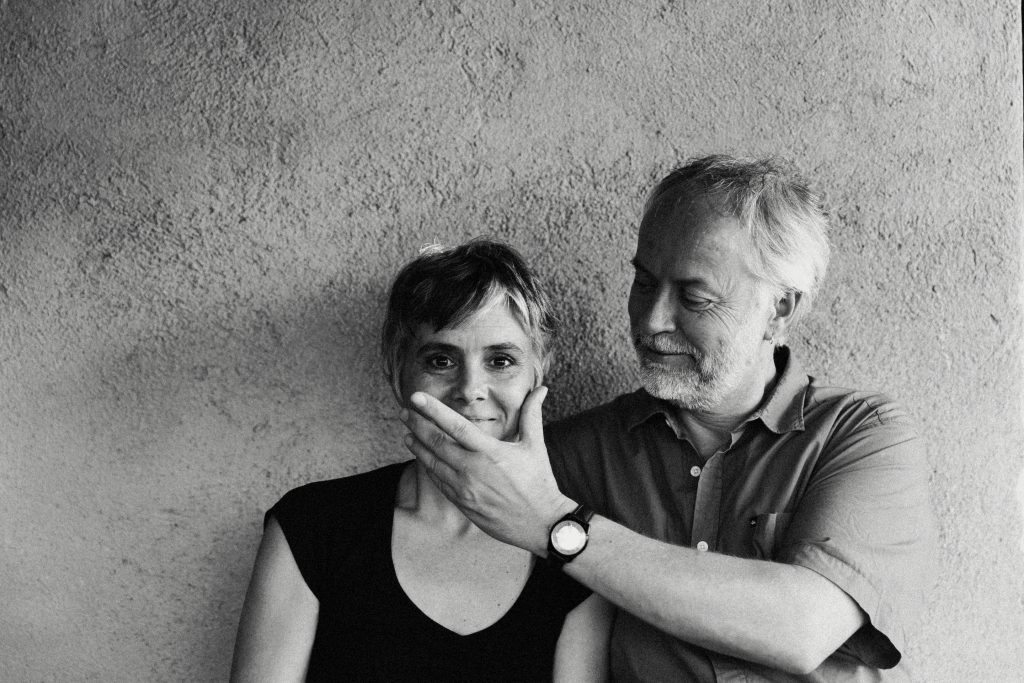 Dorothy Max Prior attended the inaugural Dramatic Writing residency at The Actors Space in July 2018 as a guest of the centre. She has previously taken part in The Art of Comedy, Bouffon, and The Nomadic Fool residencies at The Actors Space, all previously written about for Total Theatre Magazine; and has led the Dance Yourself Stupid Eccentric and Comic Dance workshop there.

This summer’s residential workshops are:

The Art of Comedy

For full details and to book see The Actors Space website.